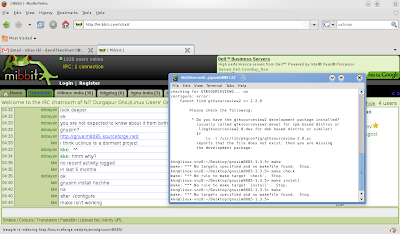 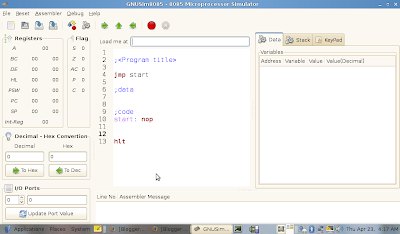 This write up took a long time coming. My apologies to all concerned. Nevertheless, this AGM took a long time coming too. When it did come though, it had little if any scope for complaint. The Annual General Meeting, 2008-09 of GNU/Linux User's Group, NIT Durgapur took place on Wednesday, the 8th of April, 2009 at the conference hall of the D.M.Sen Memorial building. It was finely attended, and the faculty was represented at the meeting by our very own S.Chowdhury sir, Sajal sir & S.Das sir, all from the I.T. Department. The meeting, scheduled for 6p.m. started in time. We were addressed by our teachers who shared a few kind words with us and assured us that their blessings and advise would always be with us. S.C. Sir told us that we should keep setting higher goals for ourselves, and be ready to overcome newer frontiers. He gave us examples of various people who had done pathbreaking work despite roadblocks and lack of support, including the illustrious work of S.Das sir. He also spoke of how our GLUG had, despite opposition from various quarters and a non-supportive administration, risen from a low to become a respected FOSS awareness hub, reaching new heights that had never been contemplated earlier, to become one of the best known GLUGs in the country. He praised the vision and tenacity of both the student members and the faculty advisors which had made this possible, specifically mentioning Debayan and Mayank among students. Sajal Sir encouraged us to turn our GLUG into an even larger entity, which would change the face of computer usage and the image of GNU/Linux as a geeky OS, at the least in our state, at the most...well, you know. He spoke of 4 things that had changed the recent world, namely Google, Wikipedia, MIT OpenCourseWare and Youtube! videos, and how we could very well be the fifth. He was followed by S.Das sir who spoke of the various opportunities we have and get and how we should go out and use them to our benefit.

This was followed by a presentation by Debayan, the outgoing head of our Software Development Unit. He spoke of the various shortcomings of GLUG in it's earlier avatar, which had caused it to partially collapse and how it had risen from that low, thanks to the undying enthusiasm and support of the concerned teachers and students. He spoke of the plethora of work done by GLUG, NITD in the past two years and of how this work can be carried on by it in the coming years. He spoke of the grand success of Mukti '09 in achieving it's primary goal, not that of pulling in huge crowds but of reaching out to the right places where spreading FOSS awareness mattered. Thanks to Mukti '09, new GLUGs have come up at several places like NIT Agartala, NIT Jamshedpur and KGEC, Kalyani. The working of GLUG, NITD has matured over its 5 year life, and it has grown to become a resource hub of sorts for the entire region, with other close-by GLUGs calling in for technical and logistic support. He spoke of the extremely helpful role of IOTA, Govt. Of West Bengal, in providing us with psychological and financial support when we were facing difficult times, and in its usefulness to the future plans and functioning of GLUG. He also gave us an idea and useful advice on the future tasks and responsibilities of GLUG, with plans like the FOSS helpline and Freedom toaster. We realised how much we had done recently and how much more needed to be done yet if what we did was really to bring about the change we wanted. Thanks to Varsha's efforts and survey, now 75 of 228 girls in our college used one distro or another of GNU/Linux, a positive tendency, to say the least, at the grassroots level. It was clear from his words that to make Free Software a true success, the basics were where we needed to go back to. The 3 mailing lists(well practically two,)received the much deserved attention in their role in popularising GNU/Linux, both in and outside the campus. The list of common interest would be groups.google.com/group/nitdgplug .

Shreyank, or Shrink as he likes to be called, spoke of his 4yr tryst with GLUG, from its early days to its current state. Entwined though his words were in his characteristic PJs, his dedication and love for GNU/Linux and Free Software was hard to miss. It's people like him, with their delicate balance of sanity and dedication, that our GLUG would miss the most.

The Director shared a few kind words with us, about our future course of action and priorities.

The committees are as follows :

The meeting was then concluded at around 8.